OK, I need to let you know.....I'm a Gleek! I absolutely LOVE Glee.  The singing and dancing are AMAZING and watching the show makes me smile.  (If you haven't watched an episode yet, you can watch one on the link above!) Last night the Alamo Draft House, in Austin, featured a Glee-a-long and I had to go...so April (I'm outing her as a Gleek too) and I sang our little hearts out as we watched some of the best music and dance numbers from season 1 and 2 on a movie screen.  The host of the evening was a Will Schuester look a like, fans were dressed up as their favorite characters....ah! so fun.  Anyone else a Gleek? 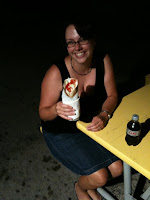 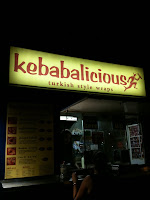 After the show we stopped by Kebabalicious, which I had previously mentioned I wanted to visit....and man, it was good! I had a felafel kebab with jalapeño/cilantro hummus and it was mouthwatering delicious.  Oh- thinking about this morning makes me want one all over again-YUM! Oh how I love food trailers in Austin...next I would like to try The Best Wurst or Mmmpanadas.
Posted by Callie Barbee at 10:18 AM